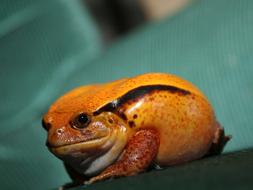 These pretty frogs are really red orange as you can see. Which is why they've been called tomato frogs, since they look like little fat round tomatoes. The truly reddish ones are from Madagascar while the domestically bred ones are somewhat lighter in color. When they are babies they may be even lighter and often more yellow. These little fellows are a bit shy and when stressed they exude a sticky substance that is like glue to get off! What a defense mechanism! Its not harmful but rather annoying. What predator wants to deal with that?

Tomato frogs are just like other frogs. They love to soak mostly at night and they like to hide either in moss, substrate or their toad houses. They eat Calcium and vitamin D3 and vitamin dusted crickets and occasionally wax worms.

Lillian in a bowl. Nice contrast with all those green frogs.

Taking a bath together. 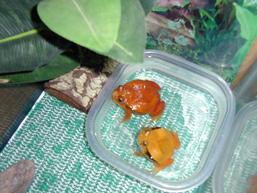 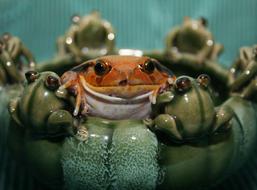