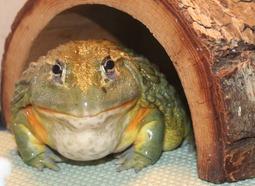 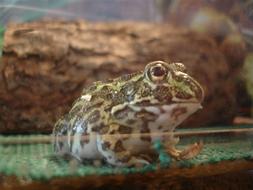 A baby Pyxie grows up to be a big frog. 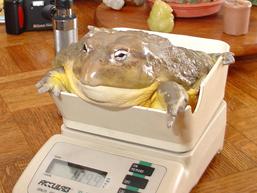 Pyxies are big green eating machines! Their scientific name is Pyxicephalus adspersus but are known commonly as just Pyxies. But they are by no means "pixies". The males are larger than the females and a big male can exceed 8 inches from nose to vent. They come from Africa and are otherwise known as African burrowing bull frogs. On their hind legs are little spade like projections and they use these to burrow into the substrate and may remain under ground for years until the rains come. You may want to keep your Pyxie in substrate but if not, providing a "sand" box to burrow in occasionally will delight your Pyxie. Its good exercise to keep those powerful legs strong. Make sure the dirt is changed frequently because he can soil it and it could harbor harmful bacteria. And you must provide him with larger and larger quarters as he grows. Even though they are big frogs, they are pretty sedentary and don't jump like American bullfrogs. His tank should be large enough to accommodate a large cave or log house and a big soaking bowl. The tank size is determined by the furniture, not so much the frog.

A Pyxie can be a voracious eater especially as babies when they are growing rapidly. They will eat crickets, night crawlers which are nutritionally ideal, red wiggler worms, wax worms, the very occasional mouse and any other thing that moves so be careful when feeding them. Your fingers may not be distinguishable from that tasty worm you're offering him for dinner.

Pyxies are quite easy frogs to care for. They will leave a large quantity of debris in their water bowls but the good news is they don't make those messes too often. They will eat a lot of food before so. A healthy Pyxie could live over 20 years or so and some have been reported to have lived about 40 years. Which means of course that you will have many many years to enjoy your Pyxie. 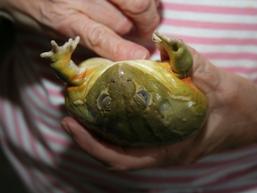