Good hygiene is necessary for frogs just like it is for us. Since frogs cannot manipulate the faucets in your home to bathe regularly, as they are prone to do, you must provide suitable bathing facilities in their home. Actually a frog will utilize their bath to drink too. All frogs drink through their skin so they need preferably de-chlorinated water available when they feel the need to bathe or drink. They will sit in their "ponds" and soak, which they usually do at night. The water bowl must be changed every day because they often leave debris behind which is pretty nice of them when you think about it. If the debris is in the bowl and easily discarded, then paper toweling, carpeting or whatever you choose to line the bottom of their tanks with, won't need to be washed or changed as often. Very few frogs are house broken. I personally have never met a frog who was, so their droppings must be removed regularly. Let's face it. You wouldn't want to sit around your house with frog droppings all over.

Besides, its healthier for your frog because he could get sick from unsanitary conditions which breed nasty bacteria. Keeping your frog's home simple will make it easier for you to provide a clean healthy environment for which your frog will thank you. Trust me. He will, even if he doesn't actually say so. You will know because he will thrive.

The cute little frog you discovered in your neighborhood pet store could grow up to gigantic proportions! Plan accordingly as he grows. A plain old fish tank without all the pumps and filters will do quite nicely for a frog. And sometimes bargains can be had on leaking tanks which obviously won't work well for fish but will be just fine for a frog. Baby frogs will be happy in small tanks, anywhere from 2 to 5 gallons but will need to be transferred to larger quarters as they grow because of the great job you are doing feeding them regularly. A screen for the frog's tank will be necessary for frogs with great jumping abilities or you may find them exploring your house instead of their own. This is not good because it could be dangerous for the frog and not very hygienic for you. And its not a bad idea to keep your frog warm with a light and maybe even a UV light which will give him the benefits of sunlight. Unless of course you plan to take him outside regularly to bask in the sun about 20 minutes at a time. This is not always convenient so in the end, a UV light is the better choice. You may even want to consider a heat pad under his tank where he can get warm but move to a cooler place if he chooses.

The tips found here are the result of my many years of caring for frogs. What you will find is advice based on my experience, books, publications, talking to other frog lovers and my frog doctor. A lot is common sense and a sense of humor is very helpful. Maybe some of these sometimes humorous tips will prove helpful to other frog lovers who want to give their frog a good home. (Millie's human) 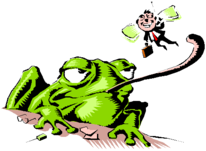 Your frog is your pet and like a cat, dog or bird for instance, his health should be important to you. Sometimes captivity is hard on a frog and he could be prone to ailments not found in his natural habitat. Some frogs will never adapt but most frogs will thrive with your tender loving care. Getting to know your frog's habits and observing him regularly will alert you to any problems he may have. A sick or injured frog should be attended to promptly since frogs seem to go "downhill" rather quickly. Probably because animals don't want to show weakness until they can't help it anymore and that's when you notice your frog needs help. It is the best interest of your frog to have a "frog doctor" to call in these situations. Some veterinarians treat frogs and other exotic pets which a frog is considered to be. After bringing your frog home, you may want to ask your vet if he would like to examine your new charge. No, he won't get shots like puppies and kittens but he can be tested for parasites which frogs could have and can be de-wormed just like puppies and kittens.

Prior to putting the new arrival into a tank with similar types of frogs already residing there, its good idea to quarantine the new guy for about 2 weeks just in case he has a disease which could spread to the older residents. Taking your frog to the vet can be an expense you weren't counting on when you brought your frog home. But if you want a happy healthy frog who will delight you and amuse you for many years, its not really that costly to keep your frog healthy.

To find out about the care of specific frogs, go to the particular frog you are interested in. (This is where you find out how to care for me. Millie)

Frogs are not fond of veggies and you can't buy frog food at the grocery store. A frog prefers live food or food he thinks is alive. Most frogs enjoy crickets and many pet stores sell them. Gathering them in your back yard is not a good idea since the wild cricket is prone to pest sprays and no self respecting frog will want to eat a chemical laden cricket. Not at all healthy for him. Not to mention that your neighbors will wonder what you're up to.
Frogs will also eat worms, night crawlers or red wigglers and they are an excellent food for your frog. Worms can be found in pet stores and fishing supply stores. Remember to dust the crickets with Calcium with vitamin D3 at least once or twice a week to ensure he has strong bones and avoids metabolic bone disease. If you keep crickets, feed them multi grain cereals for example, and spinach, carrots, oranges, apples and all the good stuff you yourself know is healthy for you. When the frog eats the cricket, he gets that good nutrition too.

Larger frogs will adore a mouse now and then but not too often because they are very fattening and fattening foods, even domestically raised crickets, can cause a film to develop in some frogs eyes so avoid mice too often. The same can be said for gold fish because they too are a very fattening food for frogs. If you do choose to give your frog an occasional treat of a mouse, buy frozen ones. Its much more humane. Naturally your frog will want you to defrost it prior to you offering it to him. Hot water for a short period of time works well. And wiggle it with a wooden spoon or other utensil so if your frog grabs it instead of the mouse, you will avoid a bite. Yes, some frogs can bite. You'll find out which ones in specific frog care. Do not put pebbles or small rocks in your frog's tank because your frog could ingest one with his food and cause nasty problems like impactions.

Feeding schedules can be trial and error. Sometimes your frog will catch his food immediately and other times he seems not at all interested. Just like us. If he's not hungry, try tomorrow. Frogs don't need to eat every day and we loving humans tend to over feed our pets which includes frogs. After you've had your frog for a while, you will know your frog's eating habits. Some frogs will tend to estivate (hibernate) in the winter and will eat little or nothing. Don't worry though. Frogs are capable of lowering their metabolism quite a bit and don't need to eat. Besides, they ate so much during the summer, they have lots of body fat to live off of. 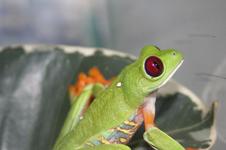 Like any other pet, keeping a frog is serious stuff. Be sure you know what is involved before bringing an unsuspecting amphibian home. Let's face it. He is at your mercy so be kind to him (or her as the case may be) and know your frog's needs so that when you get him home, he feels at home too. Well, as much as a frog can be at first. Remember. As potential princes and princesses, frogs want to think of their new habitats as the castles they expect.

Although your frog will be your pet of course, unlike furry pets, most frogs dislike being handled very much. In fact, you may notice that they squirm, and yes, even wet on you, especially when you are trying to get to know your frog better. This wetting on you is your frog's way of telling you this is stressful to him and he would prefer you put him down. Make sure he gets to bathe after you've handled him so he can replenish the water he lost during this getting acquainted session. Some frogs will always act this way. Plain and simple, they do not want to be handled. Some frogs, on the other hand, will at least tolerate you after they settle into their new environment since maybe they realize it's merely an annoyance and not a real threat. After all you do feed him and perhaps on some level they figured this out. In any case, observing your frog will be fun enough, at least to the frog, but when you do handle him which of course you will on occasion to care for him, wash your hands before and after.

Before, because the salt on your hands may be irritating to him and after, because despite the fact that your frog will bathe regularly, its still the sanitary thing to do. And one last thing. Should they squirm and you're not prepared to hold him firmly but gently, your frog could fall, hurt himself and you will feel lower than pond scum.